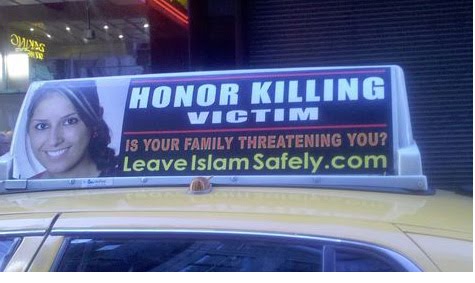 Walking out of a downtown Chicago restaurant recently, I couldn’t help but notice the advertisement atop a parked taxi. After reading the text of the ad (pictured above), I was torn. On the one hand, I was happy to see that the ad was taking a stand against gender-based violence, but on the other hand, I was disappointed that the overall message of the ad was that a Muslim woman facing danger should leave her religion in order to find safety. This overt connection between the Islamic faith and violence is not only incorrect and offensive, but short-sighted in that it fails to acknowledge the wider problem of violence against women in America.

The Honor Killing Awareness Campaign responsible for the taxi advertisement is powered by the anti-Muslim group Stop the Islamization of America (SIOA), which was created by Islamophobe bloggers Pamela Geller and Robert Spencer. SIOA’s declared mission is to educate Americans about the threat that the Islamic doctrine and those who support it present to America. While Geller refers to the honor killing campaign as an “awareness and aid campaign,” a visit to the site listed on the advertisement, LeaveIslamSafely.com, is likely to leave visitors disappointed. The site offers little to no information on honor killings and the only real resources provided are links to other anti-Muslim sites. SIOA offers no options or alternatives for Muslim women who need help, but do not want to leave their religion. It seems that SIOA is more concerned with defaming the religion of Islam and getting people to leave Islam than actually creating a real resource for women in potential danger.

An issue also not addressed is what exactly constitutes an honor killing. The media often uses the term anytime a Muslim or other non-Western male kills a member of his family. Only using the term in this manner parallels the Orientalist perspective of vilifying and degrading non-Western people, making them out to be barbaric. While murder is murder regardless of who commits it, the media often labels cases of domestic crimes differently based on the ethnicity or religion of the murderer. Take, for example, the story of a father who kills his daughter over a text-message with a boy versus a father who kills his daughter over her lifestyle choice of living with a boyfriend outside of marriage. The media only labeled the latter as an “honor killing” given that the family was Iraqi.

To solely focus on Muslims in an honor killing awareness campaign is not only misleading and wrong, but completely devoid of facts and reality. This is particularly so given that Islamic leaders continuously condemn the practice and prove that it has no religious basis in Islam. SIOA’s ad seeks to further marginalize Islam and Muslims and create an inaccurate picture of what it means to be a Muslim woman growing up in America. In another expression of these sentiments, Geller goes so far as to call Muslim households “homemade concentration camps” in her blog.

Violence against women, regardless of race, age, class, or religion, pervades our world and comes in many forms. The UN estimates that up to 70% of women will experience some form of physical or sexual violence from men at some point in their life. In the United States alone, a woman is beaten every nine seconds and an average of three women are murdered by their husbands or boyfriends each day.

Violence is not, nor has it ever been, exclusive to Muslims, and the idea of tearing a woman away from her religion and her entire support system is not the solution. If Geller and Spencer really want to make a dent in tackling issues surrounding violence against women, they need to reevaluate their campaign. This one isn’t working.