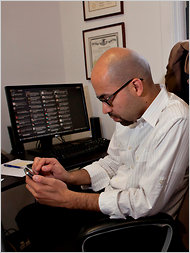 Yaser Tabbara may live half a world away from Syria, where he grew up. But as the uprising there continues, the Chicago lawyer has mounted a one-man legal and diplomatic assault against the Syrian regime to highlight the brutality of its response and help depose President Bashar al-Assad.

In recent weeks, Mr. Tabbara, 35, attended opposition conferences in Turkey and Belgium, and spoke at policy forums in Qatar and Washington. He also built a case for the prosecutor of the International Criminal Court to charge the Syrian government with crimes against humanity, and he helped draft a letter to the United Nations Security Council calling for urgent action — all while communicating with protesters inside Syria and occasionally representing his law firm’s clients in Chicago courts.

Few people would seem better qualified to lend external support to the uprising. A human rights lawyer born in Chicago and raised in Damascus, Mr. Tabbara has a long history of activism and is practiced in Western justice as well as in the ways of international courts and Syrian politics.

Since mid-March, Mr. Assad has turned his security and military forces loose on the protesters; activists say some 1,400 Syrians have been killed. Watching from afar, Mr. Tabbara said he had been motivated by “a very objective sense of outrage and a sense of responsibility that this country cannot be led by this Mafia-esque gang.”

Such views represent a shift for a man who last year worked with an international organization to improve Syria’s judicial and legal systems. Just months ago, he had been scheduled to meet with Asma al-Assad, the president’s wife, to discuss the creation of a Syrian version of Teach for America, which trains prospective teachers who commit to spending two years in classrooms in cities and rural communities.

That meeting was canceled after the protests began, and Mr. Tabbara said he had changed his mind about trying to reform the system after he saw Syrian security forces shoot peaceful protesters and listened to the “insulting, conspiracy-minded” speeches of Mr. Assad.

“I’ve always been a firm believer that democracy doesn’t happen overnight,” Mr. Tabbara said. But the uprising in Syria, coming on the heels of the more peaceful regime-toppling revolutions in Tunisia and Egypt, has convinced him that the process can be expedited.

“A lot of these gradual reforms, which had never been fulfilled, now have a chance,” he said.

Ammar Bayrakdar, a Syrian physician who moved to the United States in 1990 and has been active in the sizable Chicago-area Syrian community, approves of the shift.

“Now he’s trying to organize the opposition effort, and we support him,” Dr. Bayrakdar said. “He’s very knowledgeable and eloquent, and a sincere individual.”

Local Syrian groups have organized forums, protests and rallies, and have backed e-mail campaigns to the White House, the Syrian ambassador and representatives in Congress.

Such activism is old hat for Mr. Tabbara, who moved back to the United States to attend college in the mid-’90s. After earning his law degree from DePaul University, he provided legal representation to Chicago-area Muslim and Arab communities after 9/11. He also spent a year teaching international human rights law at the University of Kalamoon in Damascus and working with local organizations to improve education in Syria.

Back in Chicago, in 2008, Mr. Tabbara was a founder of Zarzour, Khalil & Tabbara, a law firm started with fellow DePaul alumni that mainly assists nonprofit organizations and immigrants with legal issues. Last year he rolled out Project Mobilize, an organization that supports Muslim political candidates in the Chicago area.

Since the antigovernment protest began in Syria on March 15, the movement has spread across the country and has faced increasingly bloody suppression. Mr. Tabbara said he had been in regular contact with the leaders of groups organizing protests, as well as with friends, family and former students. Some among the latter three groups have been wary about supporting the movement, in part because many middle-class families have long relied on the regime for their welfare.

But that may be changing. “These groups will join the movement in large numbers soon,” Mr. Tabbara predicted. “I know people that belong to that class who have been working very hard trying to mobilize people.”

Some analysts believe that with dwindling financial resources and increasing international pressure, the Assad regime may be teetering.

At a news conference on Friday, Secretary of State Hillary Rodham Clinton said, “It is absolutely clear that the Syrian government is running out of time.”

Mr. Tabbara said he is confident the rebels will succeed. “These are not people willing to back down,” he said. “They will not accept anything but a complete regime change.”

He added that he is unsure of the impact he and others have had on the movement for change in Syria but that the effort is nonetheless worthwhile.

“I’d like to think we are raising awareness, spreading correct information about the revolution, informing governments and officials about what’s taking place on the ground,” Mr. Tabbara said. “It definitely counters the diplomatic activism the regime has been engaged in.”