CHICAGO — There is an advertising war being fought here — not over soda or car brands but over the true meaning of the word “jihad.”

Backing a continuing effort that has featured billboards on the sides of Chicago buses, the local chapter of a national Muslim advocacy group, the Council on American-Islamic Relations, has been promoting a nonviolent meaning of the word — “to struggle” — that applies to everyday life.

Supporters say jihad is a spiritual concept that has been misused by extremists and inaccurately linked to terrorism, and they are determined to reclaim that definition with the ad campaign, called My Jihad.

“My jihad is to stay fit despite my busy schedule,” says a woman in a head scarf lifting weights in an ad that started running on buses in December. “What’s yours?”

But last month another set of ads, with a far different message, started appearing on buses here.

Mimicking the My Jihad ads, they feature photos and quotations from figures like Osama bin Laden and Faisal Shahzad, who tried to set off a car bomb in Times Square in 2010. “Killing Jews is worship that draws us closer to Allah,” says one ad, attributing the quotation to a Hamas television station. They end with the statement: “That’s his jihad. What’s yours?”

The leader of the second ad campaign, Pamela Geller, executive director of the pro-Israel group American Freedom Defense Initiative, has criticized the original My Jihad ads as a “whitewashed version” of an idea that has been used to justify violent attacks around the world.

“The fact that some Muslims don’t associate jihad with violence does not cancel out that so many do,” Ms. Geller said. “I will go toe to toe in this matter because it’s an attempt to disarm the American people.”

The debate started last year when Ms. Geller’s organization submitted a pro-Israel advertisement for the New York subway system that used the word “savage” to describe opponents of the Jewish state, stirring outrage in Muslim communities.

The Metropolitan Transportation Authority rejected the ads, citing its policy against “demeaning” language, but a federal judge overruled the agency, saying it had violated the group’s First Amendment rights.

Ahmed Rehab, the executive director of the Council on American-Islamic Relations’ Chicago office, said he was surprised that the New York case focused only on the word “savage,” not jihad — an indication, he said, that the Muslim community needed to be more active about promoting a more peaceful interpretation of its beliefs.

“Unfortunately we have witnessed in front of our very eyes a central tenet of our faith essentially become tarnished,” Mr. Rehab said of the controversy, adding, “I was tired of hearing fathers tell their children, you know, ‘Don’t say jihad over the phone. Don’t say jihad in public.’ ”

He took to Facebook, posting a childhood story about his bedridden grandmother, who had once described coping with her ailing health as “my jihad.” He started raising money, held meetings in living rooms and started the campaign in December with ads that ran on 25 buses in Chicago. The ads have since spread to buses and subway billboards in San Francisco and Washington.

“Loving a challenge, loving a jihad if you will, I wanted to take this on,” Mr. Rehab said.

David Cook, professor of Islamic studies at Rice University, said that the term jihad had for centuries been associated with “God-sanctioned violence,” but that progressive Muslim groups have been talking about peaceful interpretations since the late 1800s. While he was unaware of other public relations campaigns focusing on the word jihad before Mr. Rehab’s, Professor Cook said the push fit into a larger concerted effort by Muslim groups to explain aspects of their religion to the broader American public since the Sept. 11, 2001, attacks.

The word has shown up regularly in anti-Muslim posts on Ms. Geller’s blog, Atlas Shrugs. An outspoken activist, she is perhaps best known for opposing the building of a mosque and Islamic cultural center near ground zero in New York. At the time, Ms. Geller accused leaders of the project of being “stealth jihadists,” a favorite phrase.

Ms. Geller has called her campaign an attempt to show “the reality of jihad and the root causes of terrorism from the words of jihadists themselves.” She is also not shy about her suspicions of the Council on American-Islamic Relations, known as CAIR, which has been a target of scrutiny from Congressional Republicans in the past.

While CAIR’s Chicago chapter has helped support the project, Mr. Rehab said My Jihad was established as its own nonprofit, with fund-raising and volunteers that are independent from the national Muslim organization.

Beyond the legal maneuverings, it is the tenor of Ms. Geller’s advertisements that has drawn the sharpest criticism.

“It’s a further message of intolerance, furthering the flames that are currently out there between all different communities,” said Lonnie Nasatir, Midwest regional director of the Anti-Defamation League.

Heidi Beirich, who tracks hate groups at the Southern Poverty Law Center, which has listed Ms. Geller’s blog since 2009, said her ads subscribe “bad motives to all Muslims.”

“It’s rejecting the idea that American Muslims can have different interpretations of their religion,” she said.

At a photo shoot last month, on the 15th floor of a skyscraper in downtown Chicago, volunteers posing for My Jihad advertisements spoke briefly about their individual struggles. For some children, it was bullies at school. One man said he wanted to lose weight. An Iraqi refugee had started a new life as a single mother in America. Those ads are expected to be released in the next couple of months, though no dates or locations have been set.

Ms. Geller, whose ads went up in Washington this week and are scheduled to appear on buses in San Francisco on Monday, said that she was willing to buy more around the country if she felt it was necessary, and that she had no intention of backing down any time soon.

“I’ll be honest with you,” she said. “If CAIR is running them longer, I will run them longer.” 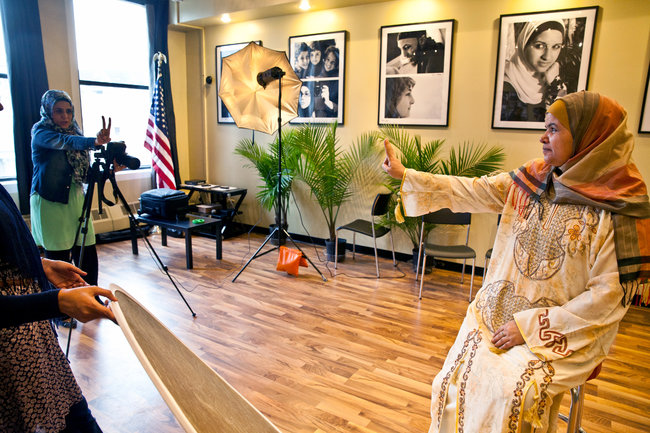 Ahlam Mahmood, an Iraq native now in Chicago, being photographed for an advertising campaign that promotes a peaceful meaning of the word “jihad.” 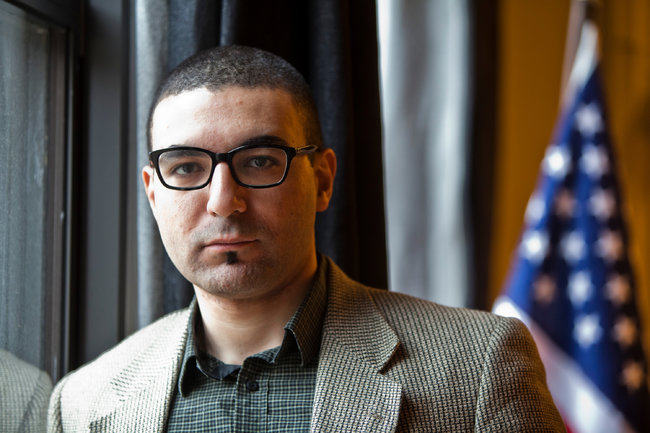 Ahmed Rehab, the founder of the campaign that promotes a peaceful meaning of the word “jihad.” 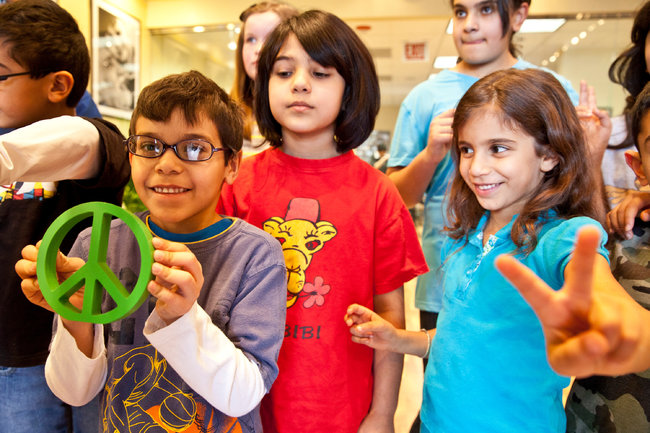 Schoolchildren posed for a group photo for Mr. Rehab’s campaign.