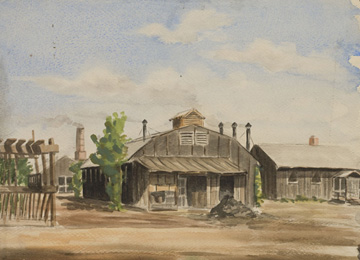 In the spring of 1942 thousands of Japanese Americans were forcibly relocated from their homes along the west coast of the United States to internment camps across the country. It is a page so often forgotten in one of the most glorified chapters of American history, but it is one that we as Americans must never forget.

Artwork used courtesy of The Butler Center’s project The Art of Living: Japanese American Creative Experience at Rohwer to learn more about this project and see original images click here.

Following the horrific attacks on September 11, 2001, our nation was confused, afraid, and driven to confront a new enemy most knew very little about. As politicians scrambled to act, it became clear that Muslim Americans were suddenly under the spotlight of suspicion. With the signing of the PATRIOT Act our government once again began to narrow the freedoms of select citizens in the name of national security.

The climate rang all too familiar to Japanese Americans, and their voices were among the loudest to warn against infringing on citizen’s rights. After the bombing of Pearl Harbor in 1941, Japanese American communities suffered the consequences of national suspicion and it was a history that Japanese American activists did not want to see repeated.

Out of this shared American experience the Japanese American Citizens League (JACL) and the Council on American Islamic Relations (CAIR) founded the youth program Bridging Communities. The program strives to educate Muslim and Japanese American youth about the history and circumstances surrounding the internment of Japanese American citizens during World War II. Through workshops that foster cross-cultural dialogue and challenge preconceived assumptions about identity, Bridging Communities brings together high schoolers of many backgrounds to ensure that factors leading to discrimination and racial profiling are not perpetuated.

For several years Bridging Communities has been a successful program through the California based chapters of JACL and CAIR, but this year is the first time it has been organized in Chicago.

The highlight of the program was a trip to Arkansas this last weekend where students were able to see first-hand the site of Rohwer War Relocation Center and artifacts from internment camps across the country.

Leaving Friday morning students boarded the bus chaperoned by staff from both CAIR-Chicago and the Chicago chapter of JACL. 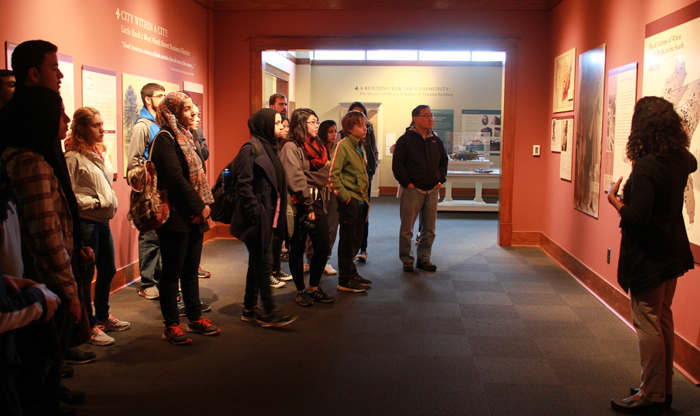 On Saturday the group toured the historic Little Rock Central high school where nine African American students had faced threats, violence, and uproar when they attended the previously all white school. The Little Rock Nine received national media attention and became a symbol of desegregation during the struggle for equal rights.

Later that day Bridging Communities was shown around the Mosaic Templars Cultural Center, a museum dedicated to preserving black history. 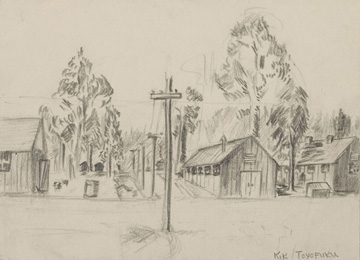 Continuing to explore the issue of discrimination the Butler Center for Arkansas Studies welcomed the group and delved into the history of Japanese internment in Arkansas. The Butler Center shared archived artwork and primary source documents from Rohwer and Jerome Relocation Centers, and participants were enthralled by the trove of knowledge and the stories shared by Richard Yada, a Japanese American that was born in the Rohwer camp. 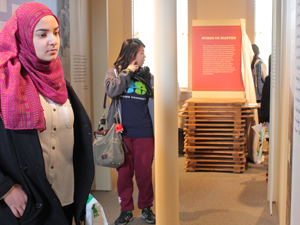 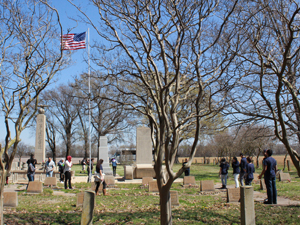 (top) Image drawn by Japanese American student interned in camp in Arkansas during World War II
(left) Students explore the the Jerome-Rohwer Interpretive Museum and Visitor Center.
(right) Participants walk through the cemetery and memorials at the former site of Rohwer Internment Camp.

On Sunday Yada took the group to see the former site of Rohwer. “It was a powerful experience,” said Fatima Ahmed, one of the CAIR-Chicago staff members on the trip. “There’s almost nothing left. Just a small cemetery and a lonely chimney marking where the edges of the camp once were.”

When fully populated the Rohwer and Jerome camps became the fifth and sixth largest cities in Arkansas. Now they are little more than a couple markers tucked behind privately owned farmland. Japanese internment is a page of history that must be remembered, because as Muslim Americans have learned over sixty years later, the struggle for civil rights in the face of national fear, is a struggle that is ongoing.

See more images from the trip on CAIR-Chicago’s Flickr!